Clare Brodie is an Australian artist based in Sydney. She is predominately a landscape painter who draws a sense of peace as she deciphers the complexities of nature.  Her paintings reflect her emotional experiences: she creates order and harmony by the use of reduced saturated colour schemes in striking combinations. Clare is an observational artist using scale and placement to create semi-abstract art works that still time.
.
.
.
.
.
Essay by Andrew Paul Wood

Painting is a medium in which the mind can actualize itself; it is a medium of thought. Thus painting, like music, tends to become its own content.

With the rise of poststructural theory in the 1980s, the emphasis on context as meaning, it almost seems that beauty and whimsicality in art for their own sake is something slightly sinful. Abstraction is not a vehicle for social change and has not been avant-garde for decades. The giddy utopian spiritualism that motivated Kandinsky and Mondrian has long since petered out. Now, twenty years into the twenty-first century, at times painting feels like the unloved stepchild of contemporary postmodern art, frequently overlooked in favour of installation and conceptual creations.

Fortunately, Sydney-based painter Clare Brodie has not allowed this to encumber her particular dream-vision interpretation of the world. Her metier is landscape – a genre with a long and tenacious tradition in Australasian art history – but this is not merely a recapitulation of old trope, but a complete reinvigoration in contemporary taste, a re-enchantment of a magic-starved milieu. And it is as infectious as a giggle. To think too critically about it would only sabotage the jouissance of the whole thing. Better to just passively absorb it all.

Sometimes Clare’s work feels a little retro, like the set of a children’s television show from the late 1970s. More than once I have thought of the aesthetic of that Beatles movie Yellow Submarine (1968), toned down and de-individualised. At other times it is like floating on the surface of the world like a Japanese print, looking down into the present. There is no cheap irony there. Each painting is absolutely, positively sincere, though the surprises and delights in the palette may constitute a playful jab at modernist abstraction’s vain pursuit of purity and transcendence. Clare’s work doesn’t intrude on or dominate the senses, it fills out the background spiritual void of your anxiety like one of Erik Satie’s Gymnopédies playing just below the level of conscious hearing.

What does abstract art even mean today? Taking her inspiration from park walks and nature, Clare filters her experience of her surroundings through emotional responses, instinctive parameters and a strong aesthetic sense into a bold, flat abstract style, distilled to an irreducible essence of figuration. The careful colours soften the sharp edges of the crisp shapes. There is a childlike freedom to the paintings, quasi-cartoonish, tempered with a confident and purposeful formalism and hard-edged graphic aesthetic that unifies the works into a single creative body.

At first glance Clare’s paintings almost seem deceptively artless and naïf, but there is a lineage there that reaches back to Matisse’s late style, but also Birger Carlstedt, Stuart Davis, George L. K. Morris, Esphyr Slobodkina, pop artists like Robert Indiana, and the suprematism and constructivism of Goncharova, Popova, Malevich and El Lissitzky redefining symbolic space in two dimensions. In the broader context of contemporary abstraction, Clare’s work fits within a wave that includes Gary Hume, James Hunter, Laurie Fendrich, Alberto Murillo, and Anna Kövecses. Beauty is back, baby! And abstraction has been liberated from the boring paternalism and patriarchal egos of the mid-twentieth century.

The Swiss art historian Heinrich Wölfflin declared that the story of art was a contest between classical and baroque impulses: the desire to reduce to the essential, and the need to be expressive and animate. Clare’s paintings are a kind of a compromise. They sit distinctively at a nexus between figuration, abstraction, the biomorphic, the geometric, the all-over, and colour field painting. Scenes are deconstructed in the same way military camouflage works, disrupting any sense of depth in their protean physicality, breaking reality down into a gestalt map of individual shapes with their own presences, interlocking, overlapping and clustering into trees and bushes. There is a conspicuous absence of drawing, or perhaps it is the underlying drawing and composition being disguised.

The palette ranges from retinal confectionary to muted rococo pastels, starting with areas of saturated colour and carefully reducing it to keep everything in harmonious key while retaining some eye-popping accents. They are sites of primal fantasy. Interloping discs and dots may float through the air like pollen or loom large in the sky as alien moons. The traditional modernist grid is subverted by congeries of overlapping pictorial masses. It has power, like the eponymous character in François Truffaut’s 1988 film La Petite voleuse ordering a raucous party to be silent so that he and his wife can dance a slow waltz. Clare’s paintings venerate transience and exist in the now, but whose or which “now” is up for debate.

The effect of looking at one of Clare’s paintings is like looking into a pocket dimension where everything is agreeable, peaceful and placid; a lost pre-COVID Eden of sorts existing before the fall and the introduction of the vicissitudes and strife that otherwise plague human existence. It’s easy to be reminded of the “Wood between the Worlds” in C. S. Lewis’ The Magician’s Nephew (1955) from the Narniad, a place that isn’t a place but rather a liminal space between more substantial realities, quiet, still, inclined to make one forgetful and drowsy, very alive, but as the character Digory says, “as rich as plum cake”. In a world that is increasingly chaotic and distressing, these soothing visual oases of peace become all the more important to integrity and sanity.

Brodie’s paintings are almost like an admonishment against mutterings about zombie formalism in the wake of the “death of painting” that never actually happened. Colour and form are therapeutic for the artist and her audience. Freed from drama, freed from theory, how pleasant it is to be invited, welcomed into an approximation of Rousseau’s innocent “state of nature” as one might sink into a warm, milky bath. The viewer is released from any obligation to interpret what is going on, just to relax and enjoy the serene tranquillity. 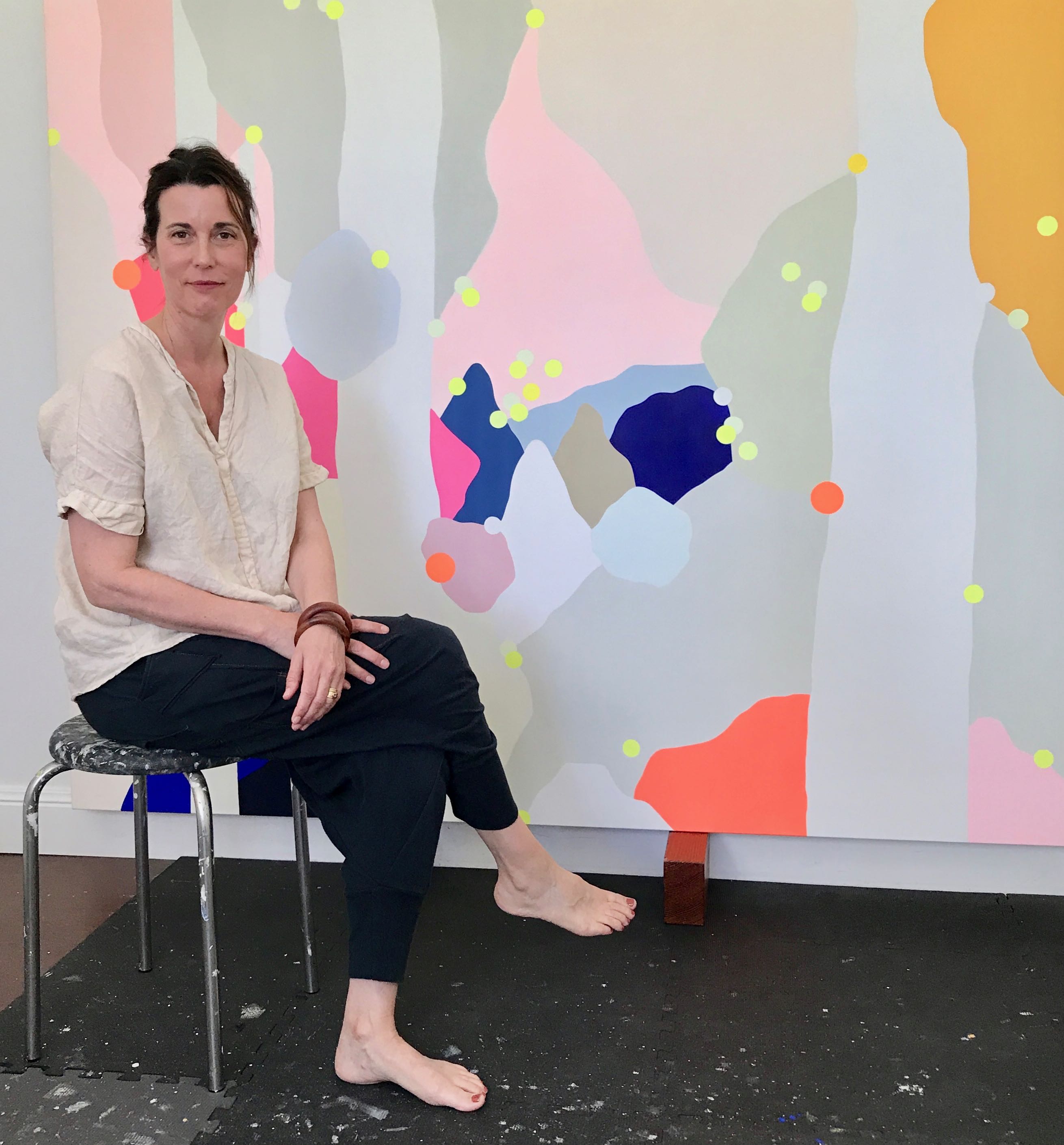 Art2muse  ‘Between and Beyond’ Solo

2018 ‘Just Off The Path’- Amongst The Trees Series